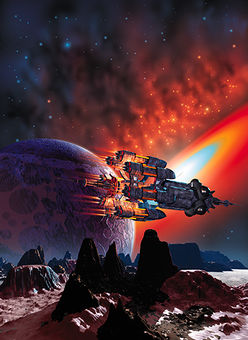 After a long year career as an illustrator and a 6 year stint as a 3d graphics instructor at a Bay Area university, George is now a full time visual effects artist and part time science fiction illustrator. So far most of the vfx have been for a feature films, the latest of which was "Speed Racer," released in May of 2008. Currently he is doing vfx work for commercials, but he will be working on another feature or two later this year. For sf illustration, he still does Analog SF covers and related work. When he is not busy with any of the above, he works on 3d reconstructions of sea life from the Paleozoic era. Eventually he hopes to come up with some way to get into 3d graphics for science education and/or museum displays.

Originator of "Diaowww! Spiders! Get 'em away!" which was based on the raving prisoner of a Frankensteinian villain from an early 1960s Hammer Studios horror film. Eventually the phrase was broken into "Spiders! Get 'em away!" and "Diaowww!" which were each used in different situations. TOG (Gary McCammon) evolved "Diaowww!" into the more subtle "Dow," which was spoken flatly to convey ironically understated exasperation towards various situations or people.