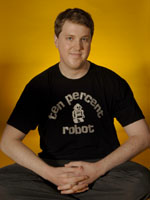 David M. Ewalt is a reporter for Forbes.com, home page for the world's business leaders and the No. 1 business site on the Web.

Ewalt joined Forbes in 2004 and covers a wide variety of topics, with an emphasis on technology, the Internet, and anything geeky. He has appeared as an expert on numerous television and radio programs.

Ewalt previously served as an associate editor at InformationWeek, joining them in October 2000. He also worked as an online reporter for the InformationWeek Daily, a position that allowed him to cover a wide variety of news topics, mainly computing and nanotechnology. While working there, he won a number of awards for his coverage of the technology industry.

Previous to InformationWeek, he worked at Long Island's Newsday, where he worked on a variety of award-winning investigative projects.

He lives in Brooklyn, New York.